The Redemptive Historical Lesson of Daniel and the Lion’s Den

The Redemptive Historical Lesson of Daniel & the Lion’s Den 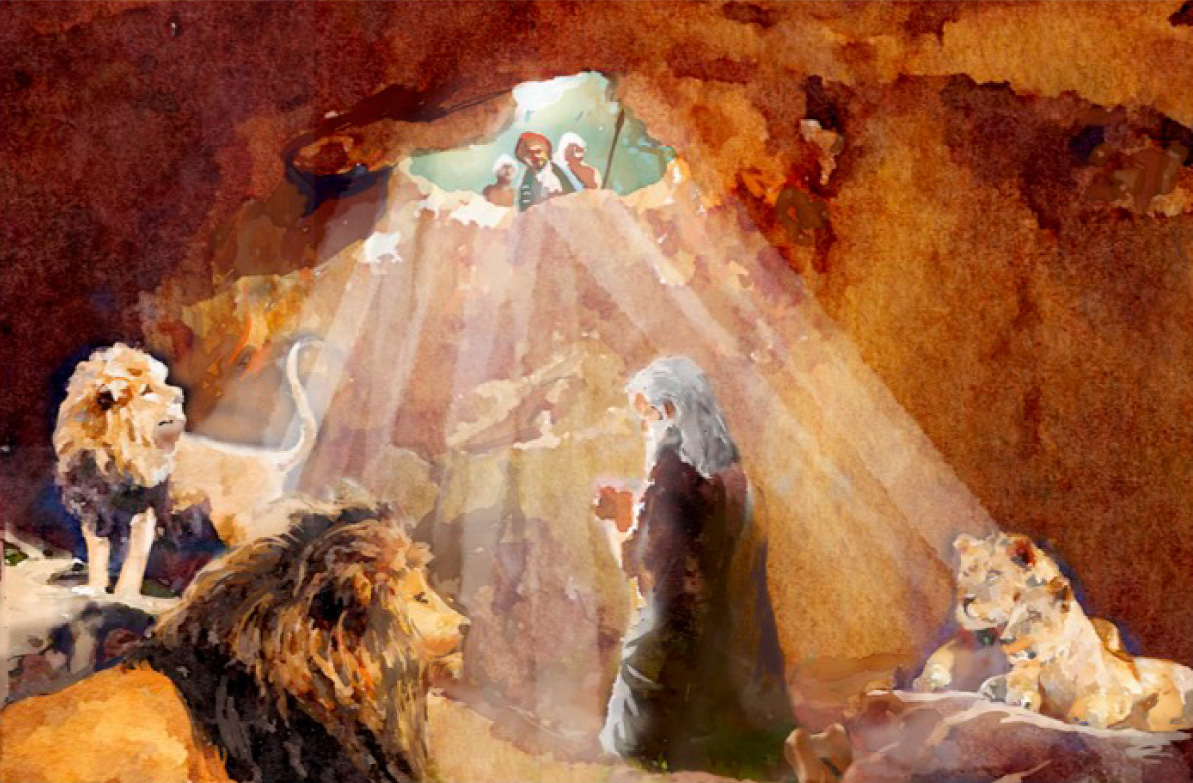 Although this story is about Daniel, it actually speaks of Jesus Christ Himself, so please read this chapter through the lenses of Jesus’ suffering and glory, and how it anticipates Jesus’ passion and resurrection.

King Darius in the text was the great king of the Persian Empire. His kingdom spanned over two continents, Asia and Africa, from India all the way to Ethiopia. It was a vast kingdom. He had 120 provincial leaders (satraps) for all 120 provinces of his kingdom (Dan 6:1). 120 is 12 multiplied by 10; people at the time divided everything by 12 because of the 12 lunar months, thus each province took turns every month to take care of the sanctuary for an entire year. Israel is also made of 12 tribes.

The Persians also developed a postal system, which was very similar to America’s “Pony Express.” Horses and translators were stationed at various locations across the kingdom. A rider would come to a station with a message, deliver the message (which would be translated as needed), then hop on a fresh horse and keep riding across the kingdom to the next station to keep delivering the message. In this way, news would spread across the empire as fast as the horse could run. This shows how well-organized King Darius was.

The ruling hierarchy at the time had the king on top, then the three commissioners, then the 120 satraps. Daniel was one of the three commissioners and the most favored. Daniel 6:3 clearly shows that the king desired for Daniel to be at his right hand, in full authority over the whole kingdom, because Daniel “possessed an extraordinary spirit”. This extraordinary spirit is the same spirit that Joseph had to move the heart of Pharaoh. The other commissioners and satraps were jealous of Daniel’s favor with the king.

The other leaders knew that Daniel was innocent, but they still tried to find the means to kill him out of envy. Doesn’t this remind us of Jesus Christ? Daniel is completely blameless, but the others were moved to envy, just as the priests were when they handed over Jesus over to Pilot.

Matthew 27:18 For he knew that it was because of envy that they had handed Him over.

Daniel’s enemies knew that there was no sin in Daniel, so they conclude that the only way to charge him is through his faith, which they know he will not compromise (Dan 6:5).

Daniel 6:6 Then these commissioners and satraps came by agreement to the king and spoke to him as follows: “King Darius, live forever!”

When they all said, “King Darius, live forever!” they did not truly mean it. Please remember this. They went before King Darius and said that they all came into agreement about a decree that all the people must worship no other man or god except for the king for 30 days (Dan 6:6-7). However, “all” of them coming together is a lie, as Daniel, the main commissioner, was never involved in this plan. Their decree is intended to flatter the king and charge Daniel with a fault. As the king is considered to be divine, his authority is the final authority and cannot be amended or appealed. Even the king himself cannot appeal it, as that will reveal that he has flaws, therefore he is not divine. The problem is that Darius fell into this trap and believed himself to be divine, so the leaders took advantage of the king’s vanity to have him sign the decree.

Daniel became aware of this, but still did not change his practice of praying to God three times a day. He opened his windows toward the west which faced Jerusalem and prayed (Dan 6:10). Since he prayed at his opened windows, his enemies could watch him and confirm that he had prayed. Daniel is NOT being reckless with this act. Instead, he is being loyal to God, Whom Daniel recognizes has allowed all this to take place. Daniel knows that the very moment he prays, he is a dead man according to the law. He understands that if he continues to obey God, he must accept his own death. Still Daniel chose to obey and knelt and prayed three times that day. Our Savior also had three sessions of prayer in the Garden of Gethsemane. He prayed to accept his cup of death.

The next day after Daniel’s prayers, on the second day, they report to King Darius while reminding him of the decree he himself signed (Dan 6:12-13). The king realizes his foolishness, and in deep distress spends the entire day until the sunset to try to find a way to deliver Daniel (Dan 6:14). This parallels Pilate, who knew that Jesus was innocent and tried to find a way to save Jesus. And just like Pilate, King Darius could not find a way, so Daniel was thrown into the lion’s den. Darius’ only hope was not in the gods of Persia he served, nor in his own strength, but in the God Whom Daniel always served.

Daniel 6:16 Then the king gave orders, and Daniel was brought in and thrown into the lions’ den. The king said to Daniel, “Your God whom you continually serve will Himself rescue you.”

They lowered Daniel into the den, which is subterranean. The Hebrews called this space “Sheol” which represents the grave. This den, filled with lions, was truly meant to be Daniel’s grave. After Daniel is lowered, a stone is brought to cover the opening and is then sealed by King Darius. Jesus was also sealed in His tomb with a huge stone.

Daniel 6:17 And a stone was brought and placed over the mouth of the den; and the king sealed it with his own signet ring and with the signet rings of his nobles, so that nothing would be changed regarding Daniel.

Matthew 27:66 And they went and made the tomb secure with the guard, sealing the stone.

Daniel is lowered on the evening of the second day and is sealed in for the entire night. King Darius went back to his palace for the night and forbade all entertainment, fasting and losing sleep (Dan 6:18), grieving and hoping that his faithful servant would be delivered. He rose very early the next morning to go to the den of lions (Dan 6:19). This is the early morning of the third day. The women of Galilee also went in haste to the tomb of Jesus early in the morning on the third day. Now King Darius goes in haste and cries out, “Daniel, servant of the living God, has your God, whom you continually serve, been able to rescue you from the lions?” (Dan 6:20). And Daniel responds, “O king, live forever!” (Dan 6:21). Daniel truly means this! It is not just a formal greeting, he is sincerely praying for the eternal salvation of the king who loved him so much.

Daniel 6:21-22 “O king, live forever! My God sent His angel and shut the lions’ mouths, and they have not harmed me, since I was found innocent before Him; and also toward you, O king, I have committed no crime.”

“My God” is the God of Abraham, Isaac, and Jacob. An angel came to shut the lions’ mouth, and angels also came to roll away the stone of Jesus’ tomb, greeting the women and encouraging them with the glorious news that Jesus has been risen from the dead.

Daniel was literally raised up, out of the den of death. This is the same language of resurrection (Jesus was raised from the dead). The king’s extreme gladness also reflects the shock of the disciples to see their Lord back with them. Following Daniel’s deliverance from death, those who accused Daniel, along with their wives, were thrown into the lions’ den. They suffered everything they had intended for Daniel. Daniel’s story unbelievably corresponds with that of Jesus. When the wicked are thrown into the lions’ den, the lions will destroy them and crush all their bones. But Daniel didn’t break any bones (Dan 6:22). Likewise, “Not a bone of Him shall be broken” (John 19:36).

Moreover, King Darius used his amazing postal system to communicate to all over the empire the great miracle of how the God of Daniel delivered Daniel from the lions. So, 500 years before Christ, the gospel is being sent out to all over the known world.

Daniel 6:25-27
Then Darius the king wrote to all the peoples, nations, and populations of all languages who were living in all the land:
“May your peace be great! I issue a decree that in all the realm of my kingdom people are to tremble and fear before the God of Daniel;
For He is the living God and enduring forever,
And His kingdom is one which will not be destroyed,
And His dominion will be forever.
He rescues, saves, and performs signs and miracles
In heaven and on earth,
He who has also rescued Daniel from the power of the lions.”

Daniel 6:25-27 read just like the Pauline epistles. King Darius, once a polygamist, is now writing his confession of faith of God and encouraging all to believe as well. Likewise, after Jesus is raised and seated at the right hand of God, the letters of the apostles that preach of the gospel also go out to all the world. Both King Darius and the apostles preach of the one God who can deliver from death. “The devil prowls around like a roaring lion, seeking someone to devour” (1 Pet 5:8). “But the Lord stood with me… and I was rescued out of the lion’s mouth” (2 Tim 4:17).

The scriptures are like a symphony that harmonize so beautifully. I have identified 150 more stories in the Old Testament that all teach of the suffering and glory of Jesus, and they all directly proclaim the gospel. We celebrate Daniel for his courage of faith and for being a remarkable man of integrity and faithfulness. But he is merely a foreshadowing of Jesus. Only Jesus has overcome death in the grave. The devil is a roaring lion, but only Jesus can deliver us from the lion’s mouth. Even during times of our suffering, even when we face false accusations and the envy of our enemies, even when we fall prey to the powers of world empires, we can place our hope in the confident knowledge that God is the sovereign Savior of the world. He will make all things work together for good according to His purpose, for He is the Lord of our salvation. “If God is for us, who is against us?” (Rom 8:31). This is the glorious message of the gospel that was sent before and after Christ, even until now, to all over the world.

Prev My Galilee Is Glorious 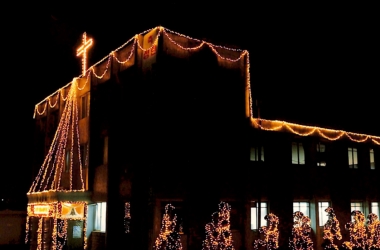 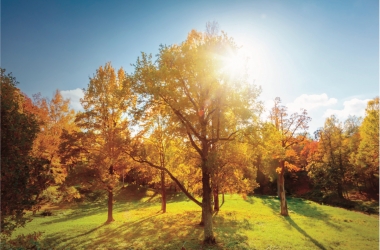