[Seminar] The Proclamation of the Word of Redemptive History for All Nations: Seminars in Pakistan and Malaysia

The Incheon International Airport was crowded with travelers from an early hour. Among the crowd gathered 110 special travelers, the ministers and saints were traveling to Pakistan with resolute determination. The flight was long and tiring, transferring flights in two different countries before arriving at the final destination. Though it was apparent that everyone was exhausted after the long journey, they arrived in Pakistan armed with a sense of duty and pride in having participated preparing for months with prayers.

The next morning, everyone headed to Alli Education Center, where the seminar for the ministers was to be held. God’s amazing redemptive administration in the genealogies from Adam to Noah was testified by Rev. Philip Lee. Rev. Lee then skipped lunch and proceeded on to the second lecture. Throughout the two lectures that continued for hours, not a single one of the 500 or so attendees moved an inch. They diligently took notes on their booklets prepared in Urdu, concentrating on the History of Redemption series that have been revealed to them for the very first time.

A scene of grace: Over people 450,000 attended, all unified by the Word of redemptive history and praise

Because so many people have been warning about terrorism in Pakistan and the country’s poor public security, no private time was given and everyone had to rest at the hotel and devote to prayers when there was no official program.

Finally on the second day, Wednesday of March 15th, 110 participants on three minibusses arrived prayerfully at Burt Institute, a cricket stadium in the city of Lahore, for the rally. The Sharon praise team could be heard singing, and we were moved to uncontrollable tears upon seeing that so many believers had already occupied two-thirds of the grand stadium.

Hundreds of staff stood in two lines, treating over 100 people from Korea as VIPs, greeting us and putting their best efforts in our security and safety. Carpets were laid across the entire floor of the cricket stadium so that more people could sit, while having provided chairs for us. The altar was made by connecting several containers together and a large banner written “Prayer Festival” was attached on the front. By 6:30 P.M., the entire stadium was already filled with burning passion. Even the back, which was previously empty, filled up before we knew it. There were also people outside the stadium counting up to over 450,000 standing attendees in total. An hour session of praise and prayer was followed by prayers and testimonies of the local people. When Pyungkang’s Sharon Praise Team sang in Urdu, all became one. Race, language and skin color differed, but every eye burned with the yearning to praise and receive grace.

Most of the Pakistani saints who attended were in family units. The entire family including parents, babies and grandparents were all shouting, “Hum Sab Ka Pakistan (our nation Pakistan)” waving the national flags of Pakistan in hand. The two words that brought these people together during the three-hour rally were “Pakistan” and “Hallelujah”.

The culmination of the rally was the preaching of the Word of redemptive history. Considering the high illiteracy rate in Pakistan and its the religion of Christianity focused merely on curing the ill, an hour-long Bible lecture was an unprecedented initiative. Through Rev. Lee’s lecture on the genealogy from Adam to Noah, everyone heard of the testimony that despite disturbances and persecution from Satan, the God’s history of redemption never ceased to progress, eventually leading to Jesus Christ to accomplish the remarkable salvation of mankind. During the seminar using the big screen, writing on a blackboard and interpreting into the local language, the Pakistani religious leaders and saints were greatly impressed and moved by the miraculous Word of redemptive history.

The rally reached its climax when a video was shown on the ministry and theological achievements of Rev. Abraham Park, the author of the History of Redemption series, and when the Sharon praise team sang in Urdu.

This event was hosted by Rev. Anwar Fazal, chief of Isaac TV and head pastor at Eternal Church in Lahore. Isaac TV is a broadcasting company transmitting to over 200 countries worldwide in English. Because the rally was held in consideration of economic difficulties and terrorism in Pakistan, not only Christians but also many Muslims came. Everyone attending the rally had the national flag of Pakistan in hand and praised in unity, crying out, “our nation Pakistan.” Many believers came up on stage and confessed that they were healed and that their prayers were answered.

Pastor Azam of Isaac TV, who organized this event said, “This rally was authorized just three days before the actual date and everything seemed impossible because of the terrorist attacks that occurred a month ago. But through God’s grace and power all which had once seemed impossible became possible.” He was also thrilled that the online live streaming was viewed by almost 80 million people, an unprecedentedly enthusiastic reaction. He also added that feedbacks have been received by the company that many of the ones who couldn’t attend also have been healed and received grace just by watching the internet TV.

The following morning, we gathered in a seminar room on the first floor of the hotel to share stories on grace each one of us received during the rally. Among the fifty ordinary saints, many elderesses attended this rally despite opposition and concerns from their families. They all confessed with one voice, “I have not been doing anything for the church or for the history of redemption so I attended this rally in order to take part with prayer and even made myself ready for martyrdom.” One elderess gave her picture to her husband before attending, saying, “In case I die from terrorist attacks, please use this picture as my funeral portrait and thank the Lord.” One college student from Hepzibah, Seung-Hwan Lee said, “I have been crying out about world mission only in words previously but I attended this rally in order to bring revival in Hephzibah and to accomplish my vision in world mission. By attending, I was deeply moved and a great vision was shown to me.”

It was God’s great work for Pyungkang Cheil Church to have organized such an amazing rally and to have preached the Gospel to an Islamic country, despite high risk of terrorist attacks.

After lunch, we visited Isaac TV and Eternity Church whose head pastor is Pastor Fazal and returned to our hotel to have dinner before departing to the airport. An airport staff had watched the rally on the internet and he greeted the Sharon Praise Team and Rev. Young-Soo Kim. Only then did I realize the significance of what I had heard at Isaac TV, that over 80 million people have viewed the rally. We boarded a plane with Rev. Philp Lee and left to Kuala Lumpur for the History of Redemption seminar in Malaysia.

The History of Redemption Seminar for the Chinese in Ipoh, Malaysia
Over 300 people attended and was held in great success

We boarded the plane and arrived at the airport of Kuala Lumpur, the capital of Malaysia, the morning of Friday, March 17th. We had a light breakfast with the people who came out to greet us, got on cars and after a three-hour drive, we arrived in Ipoh where the seminar was held. Canning Garden Methodist Church (Head pastor: Thomas Chin), a church which hosted the seminar this time, is a very dedicated church which held three history of redemptions seminars between 2012 and 2014. In particular, this seminar was held at the request of Rev. Yu Chiew Song who is in charge of Chinese interpretation, so most of attendees were Chinese ministers from Ipoh and neighboring cities. Hence, English translation was provided through headsets (translation by Rev. Samuel Kim, Singapore Zion Covenant Church) and Rev. Il Kwang Shim of Guangzhou Nulpyungan Church interpreted on the altar directly in Chinese.

The lecture handouts were prepared both in English and Chinese so there was an enthusiastic reaction from the local Chineses attendees. On the morning of March 18, the very day of the seminar, almost every seat was filled during praise even though it was very early in the morning. Rev. Philip Lee testified throughout the seminar, from the very first lecture (presided by Rev. Yu), of God’s amazing redemptive historical significance “from Adam to Abraham” which is the core of the Genesis genealogy in the 1st book of the History of Redemption series. Rev. Philip Lee arrived in Malaysia before the enthusiasm of Pakistani rally cooled down and preached on the redemptive historical significance of “the genealogy from Adam to Noah”, “the genealogy of Enoch”, and “the genealogy from Noah to Abraham”. During small breaks in-between lectures, the attendees gathered in small groups to share their experiences of receiving grace from the lectures and lined up to buy the History of Redemption series. They showed great interest in the other books as well.

Thanks to dedicated efforts and prayers of Rev. Myoung-Il Shin and his congregation in Kuala Lumpur, the capital of Malaysia, the History of Redemption seminars were able to take place continuously. Even for this seminar, the entire congregation enthusiastically threw themselves into multiple tasks including praising, selling the history of redemption books, supervising the attendees, producing study materials and shooting recordings. Either due to these efforts or due to the strong presence of grace received from the amazing Word of redemptive history, another seminar was requested in July next year. The spreading of the Word of redemptive history never rests, reaching to all nations. Our steps of prayers and efforts will also continue to march on.

Prev [Seminar] The Seeds of the Word That God Has Already Sown i... 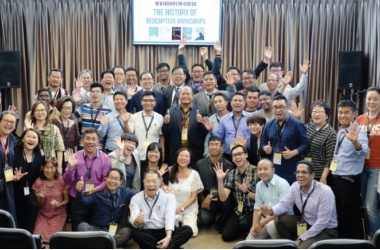 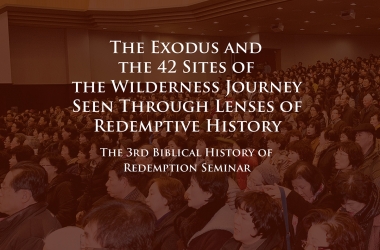