LET'S GO TO THE SCENE OF THAILAND'S HISTORY OF REDEMPTION SEMINAR

A History of Redemption Seminar was held at Pastor, Aomsilp Paesalasakul's Covenant Church on August 27th. Rev. Phillip Lee gave a lecture on The Genesis Genealogies to a crowd of around 300 pastors and ministers who all lead their ministries in Thailand. This seminar in Thailand was the second since August 2013. Pastor Aomsilp, who organized the event, attended the "Global Conference for Preachers of Redemptive History," hosted by Pyungkang Cheil Church, and participated in the special lectures over six days. He also mentioned through True Peace Magazine that his mission is to pass on and spread the Word of redemptive history to the next generation. Thailand has a population that is 95% Buddhist While Christians only make up around 0.4% but in the past 10 years, Christianity has been on the rise and Thailand has been the destination for many Korean missionary endeavors. The Covenant Church in Bangkok, has a congregation of around 800 and is the second largest church in Thailand. Pastor Aomsilp is the head pastor of the church as well as the chairman of the Thailand Gospel Centric Conference and is a respected leader in the Thai, Christian community. * True Peace, June 2016

After his visit to Korea, he believed that the Word of redemptive history is truly the Word that can save Thailand, and prepared a seminar for an audience of 400-500 ministers and pastors, despite the many hardships that came along the way. Pastor Aomsilp put his own name at risk, and even until the day of the seminar made phone calls to bring more people. Even with these obstacles, many people gathered to aid the seminar. Pastor Ake, who devoted himself to spreading the Word of redemptive history since the first seminar, was tasked with the introduction, while Pastor Praphan who is currently translating the History of Redemption series into Thai was tasked with the role of interpreter. Pastor Samuel Kim from Zion Church in Singapore as well as other congregation members also aided in live English interpretation and the selling of the books. The congregation of Covenant Church also tirelessly prepared worship and meals.

The seminar’s venue was held in the Laupar region in Bangkok, the capital city of Thailand. The region is comparable to Guro-gu at the center of Seoul. Pastor Aomsilp is known as the foundation of the great Covenant Church in Thailand. He is a famous pastor who represents Christianity. I currently reside in a city called Kanchanaburi, roughly two hours away from Bangkok.

I have been carrying on dawn prayers for the History of Redemption Seminar, and through God’s grace, my two daughters and two their Thai saints ended up attending the seminar with me.

We woke up at 5AM on Saturday and moved to Bangkok church to arrive at 7:30 AM. The volunteers at the kitchen seemed busy preparing breakfast, lunch and refreshments. The place was filled with grace with the saints of Singapore Church busy serving in various ways, such as promoting the Thai version of the History of Redemption series and praise CDs.

In the staff office on the 2nd floor, Pastor Philip Lee, Pastor Samuel the English translator and the pastor in charge of Thai translation were preparing for the lectures by writing the redemptive history contents on the board. I greeted them with joy and I was overwhelmed with happiness as it felt like I was meeting Rev. Abraham Park, the writer of the History of Redemption series.

I attributed glory to God when I saw people praising and dancing before the seminar started. Everyone stood up to praise and dance. The atmosphere was heated with audible prayers. “Amen! Hallelujah!” resonated repetitively three times.

The audience gave an exclamation of astonishment and clapped when they were told that the writer of the History of Redemption series, Rev. Abraham Park, prayed in Mt. Jiri for three years and six months and read the Bible 1,800 times. I could feel that the writer was with us throughout the seminar held in Thailand. 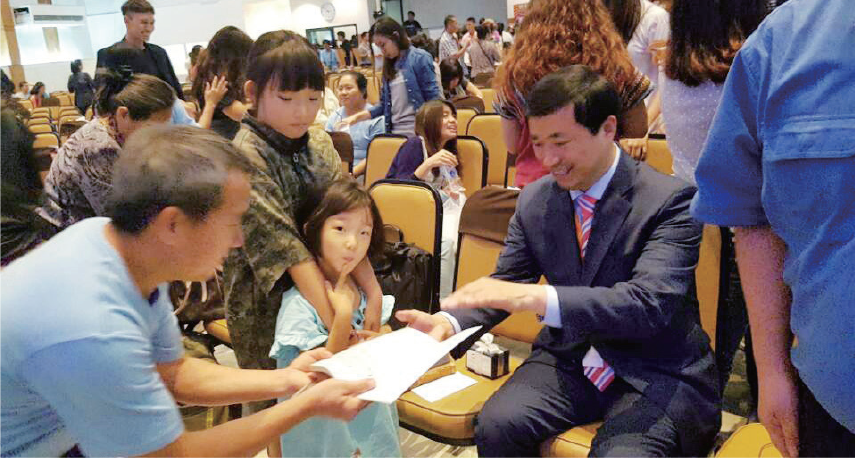 Following the sermon, people responded with “Amen! Hallelujah!” to the healing prayer led by Pastor Philip Lee, and they were overwhelmed with joy of having understood the eras and genealogies in the Bible. After the seminar, the saints from Thailand all hoped to get an autograph from Pastor Philip Lee on the Thai-translated books had purchased. They all hoped for Pastor Philip Lee to lay his hands atop their heads and pray for them. 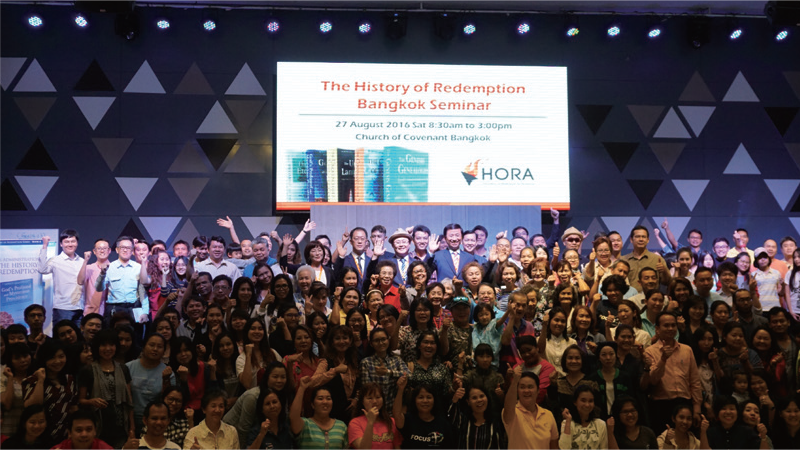 I pray that the faith Pastor Aomsilp and the saints of Thailand church grow to yearn for more seminars and that Thailand becomes the leading Christian country through future seminars.