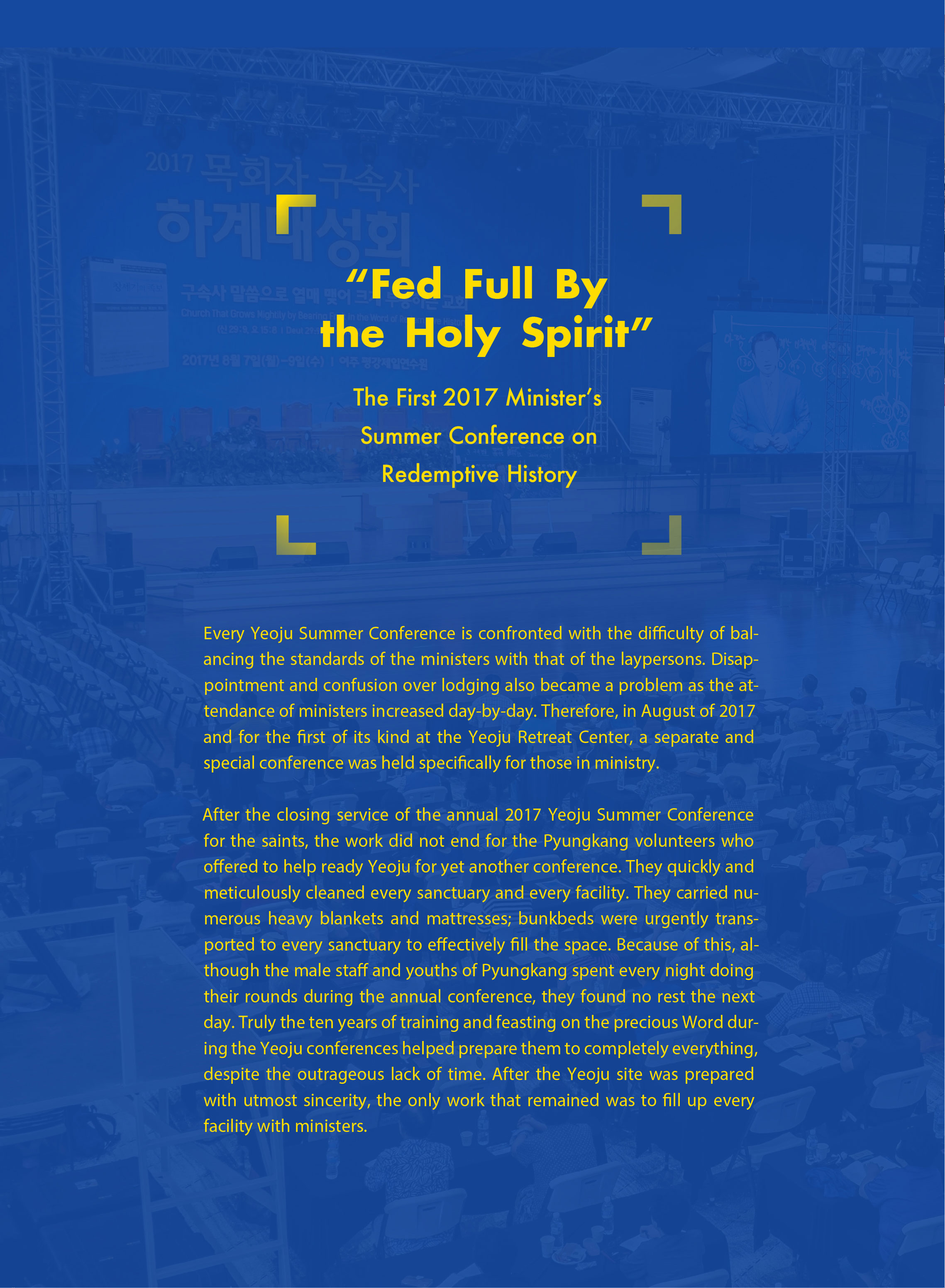 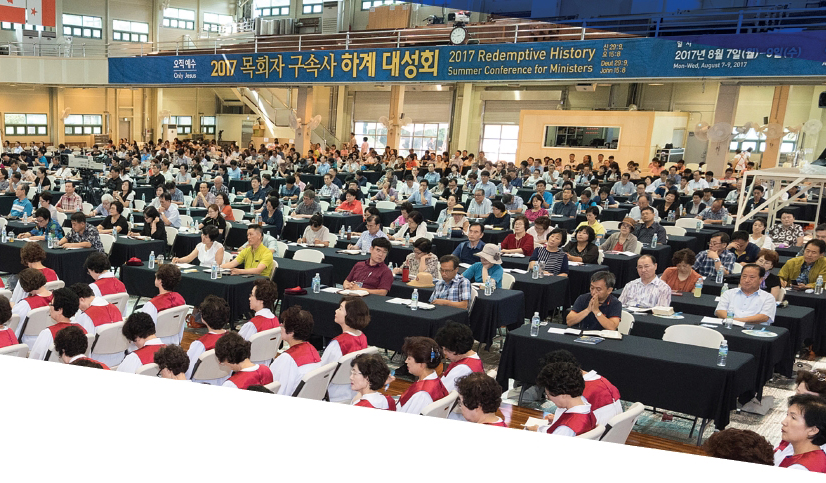 Fed Full By the Holy Spirit

On the first day of the Minister’s Summer Conference, the ministers that loved the Word fervently started to gather, even as the day’s temperature was grew hotter by the hour. A single set of footsteps swiftly became the footsteps of 800 people as they filled the seats prepared in the Moriah sanctuary. Even the scorching heat could not compete with the burning hearts of those souls that hungered for the Word!

Through two rounds of lectures, the conspectus on Redemptive History and genealogy was introduced. The Biblical genealogy is undoubtedly the treasure house which compresses God’s redemptive administration and the Genesis genealogies. This is not just a myth or exaggeration but a historical fact. Every participating minister could not just help but be in awe of this unprecedented Word. After the lecture was over, at the Huisun Memorial located in front of Beersheba endured the ceaseless parade of ministers who longed to see with their own eyes the accomplishments the author of the History of Redemption series, Rev. Abraham Park, as well as the history of Pyungkang Cheil Church. This continued until 1:30am.

At the crack of dawn on the second day, every house was full of the wailing sound of prayers. Cries of gratitude burst out due to souls being overwhelmed and touched by encountering the Word. Their earnest cries that rang out all throughout the campus testified of their desire to receive the Word through the remaining lectures. Three lectures were held on Tuesday. The genealogy of Genesis 5 and the fact that Adam lived contemporaneously 56 years with his 9th generation, Lamech, was revealed through the morning lecture. While looking at the secret of Enoch’s transfiguration in the afternoon lecture, it was revealed through the Word that Enoch did not walk with God for the first 65 years of his life, throughout the 308 years of living with Adam. Enoch was transfigured after walking with God for 57 years after Adam’s death at age of 930, even though he had already repented and lived the life of walking with God for 243 years. In the evening lecture, they learned that Noah and Abraham lived contemporaneously for 58 years, and that during those years Noah passed down his faith. As a result, Abraham left his hometown, relatives, and his father’s household and entered the land of Canaan. They learned that the events in the Bible are not just historical stories but lessons that can be applied to our lives today. Guest ministers defended this fact with their own personal testimonies, further strengthening the case that churches will be actively revived when the precious Word of redemptive history is applied within each church.

Acts 19:20 states, “In this way the word of the Lord spread widely and grew in power.” This “Word of the Lord” is not just referring to the church in Ephesus or just to Apostle Paul. The Word itself holds the strength to flourish and gain power. As ministers gave their lectures, the Word of redemptive history powerfully started to work in a mysterious way within every guest’s heart. This Word also worked in the hearts of the Pyungkang Cheil Church saints, and they served with joyful hearts. They were all called by grace, they served through grace, and they witnessed grace working in mysterious ways. 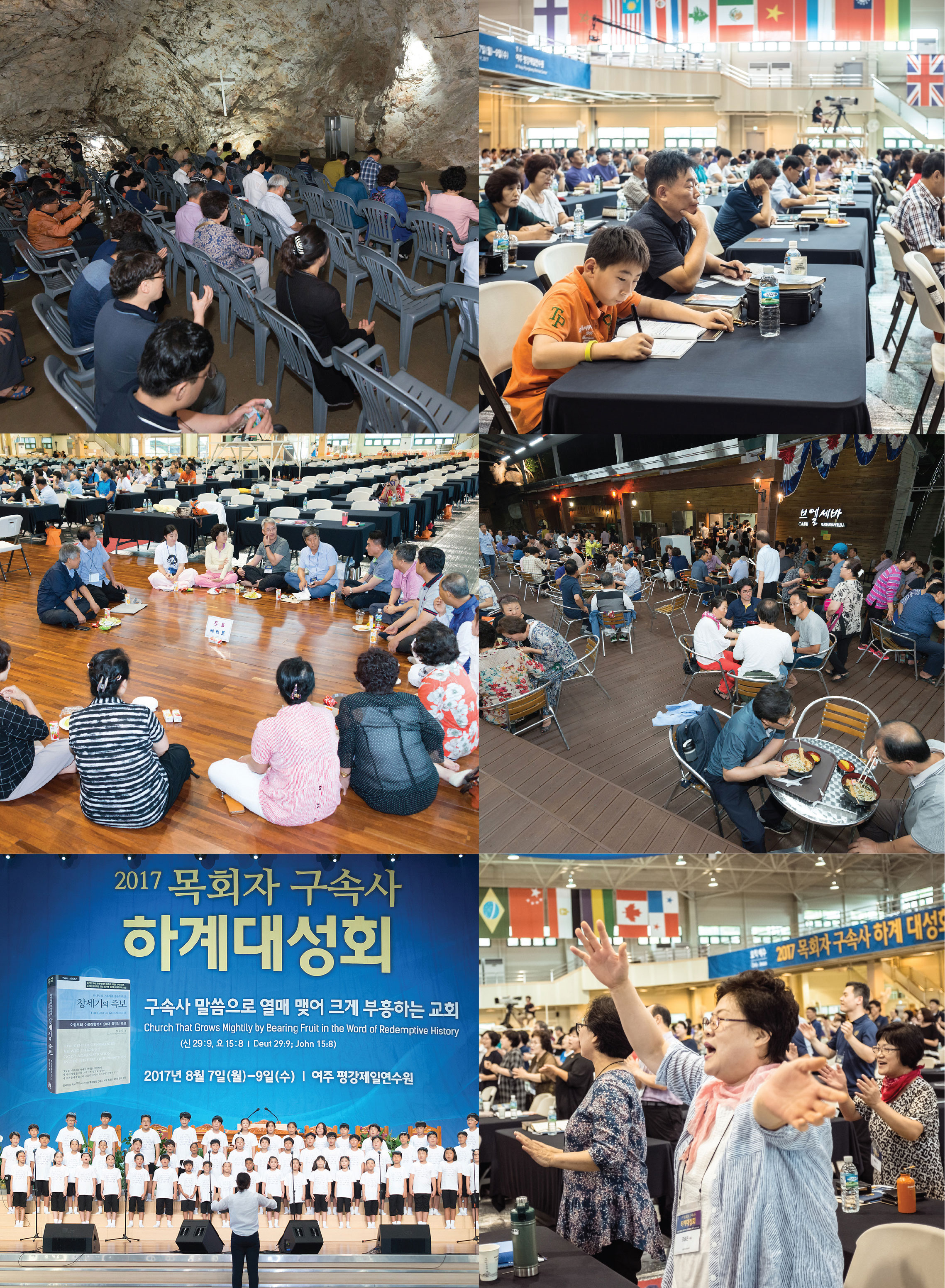 Despite having to share rooms with strangers during this three-day, two-night journey, everyone quickly became comrades. Throughout the retreat, all the participants armed themselves with the sword and shield of redemptive history so that they can conquer the wickedness of the devil. The last lecture revealed the redemptive-historical meaning behind the names from Shem to Abraham and delved deeper into the separation between Abraham and Terah. The closing service entitled, “Until We Meet Again,” expressed everybody’s longing once again meet with their new spiritual comrades.

This was only one conference, but everyone was fed and filled with this single spoonful. However, that alluring taste created the hunger to learn more. Imagine the wonder of how deeply the next spoonful will make their hearts pound.

Every attendee in ministry commended the lectures, as well as praising the hospitality and all other aspects of the retreat. Some testified that it was like experiencing heaven on earth. The fee for attending was only 10,000 KRW (10 USD) for the members of Pyungkang willingly offered 30,000 KRW each, so that they could serve those who attended the conference. Even before opening the admission and promoting 100 seats, more than 300 people signed up. One pastor gave his impression.

Psalms 103:20 records, “Praise the Lord, you his angels, you mighty ones who do his bidding, who obey his word.” This angel in Hebrew is ‘malak’, represents not just a spiritual being but also lion. The 2017 Minister’s Summer Conference on the History of Redemption was the feast of Heaven. It was an event in which the ringing bells of accomplishing the work of redemptive history emanated throughout Yeoju. The heirs of the Word of redemptive history heard the ringing and gathered in one place to heed the call of God.

Prev [Special] Following the Footsteps of  the Protestant Reformation

[Special] Following the Footsteps of  the Protestant Reformation 2017.11.20by [Interview] The Impossible Dream Comes True : All Nations Com... Next