[Interview] The love of his life was only the Bible and his saints - Mrs. Kap Sik Min, wife of Rev. Abraham Park

Do you think you got your daughters in law well?
Of course. I couldn’t pick anyone better even if I tried.

Was he affectionate towards his grandchildren?
It did seem like he adored Jabez (eldest son of the eldest son)... he didn’t really have affection towards the children. If it were other grandfathers they would have given them piggyback rides and held them, but this grandfather would only hold them once and give a single kiss and that’s it.

But there is a picture of him kissing his oldest granddaughter...
Maybe, and that was probably the one time. [Laughs] 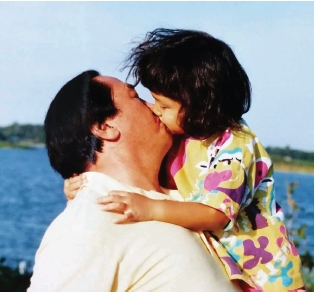 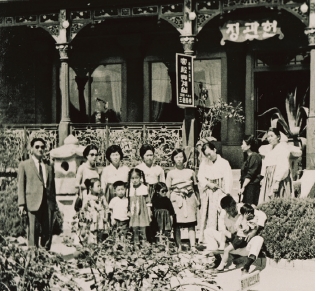 Have you ever gone on family picnics?
We would go take the kids to visit the old palaces. Places like Changgyeong Park. Even then, he would take us and leave. [Laughs]. Wherever he went, saints were always his first, second, and third priority. It was never his family.

There is no other pastor like that.
We can’t have two pastors like that. It can only be one. One is enough.

There is only one wife like that too.
I guess we can say I’m the only one who had to live like this.

If you could go back in time, would you have married Rev. Park?
No. [Laughs]. I married him because I didn’t know.

You must have been able to because you didn’t know.
Exactly.

I think it’s like that for our lives of faith; we do things because we follow how God leads us, not because we know.
That’s right. We can’t. Who would we learn from if we all knew? We learn because we don’t know.

Did Rev. Park have any special habits or practices in his daily life?
No. He lived according to his circumstances.

How much did he sleep?
Goodness, he was someone who didn’t sleep. He would have Bible studies until past midnight, since people like Pastor Woon Cho Yeo who had these Bible studies lived at our house.

What was his favorite food?
He didn’t have a favorite food, but he ate anything. He just didn’t eat much. I couldn’t make a lot of dishes since he wasn’t able to give me much money, and there were always so many people at the house for Bible studies. Even if all we had was one stew, he ate it deliciously. He liked fish stew from fish that was not smelly, like cod and pollack. He didn’t like eating meat. We always had bean paste stew and simple things like that because we didn’t have much.

Did you ever see the handwritten manuscript of the History of Redemption series that Rev. Park wrote?
I would bring them home, but I couldn’t open it for fear that I would ruin it somehow. It just stacked up at home.

Did he write books at home too?
He would sit at the writing table and always be reading the Bible and writing things, but I didn’t know what he was writing. People would always tell him to publish his writings, but he wouldn’t. Then in just several years nine books were published. That was all what he wrote when he was young. The sermons he gave from when he was young are all in those books.

Did you ever cry as you watched him, or thought that it must have been hard for him?
When he first started preaching, his vocal cords were very weak. He would lose his voice after a sermon... It was very pitiful. As he got older, his throat cleared up a little. Even though he prayed that much in the mountains, he would lose his voice after sermons. It must have been so hard on him because of his vocal cords. It was pitiful.

When the so-called “heresy evaluators” attacked him...
Oh no. I don’t even want to talk about that. That was so terrible.

He said he suffered so much, to the point all his teeth fell out.
There are no words to describe what he went through. That person followed him all the way to America... It was so horrible. He would spread rumors in the church and go back and it was terrifying. We rode the cheapest car from Ford that would break at any moment and he secretly took pictures of that and advertised that the pastor rode nice cars. Those were really difficult times.

Founding pastor must have spoken badly of those people to you after going through all that.
He never said anything bad to me. I don’t know if he said anything to other people, but I don’t think he did. He is not the type to fight with others.

Have you ever seen him fight with other people?
Never. 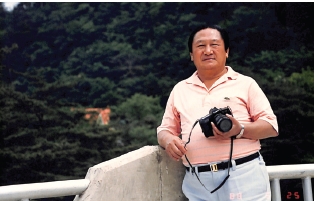 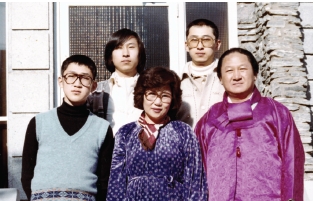 Founding pastor really loved cameras. He would always say the mechanics of cameras is like our lives of faith, where we have to focus on God. Since when did he like cameras?

From the very start. Even when we didn’t have much, he always carried a camera around. I told him to take pictures of the children growing up, not of other people, but he didn’t do things like that.

Is there anything he liked besides cameras?
Other than cameras, all he liked was the Bible.

He didn’t have any hobbies?
He didn’t even have hobbies except the Bible. He didn’t even read any novels. If he had them lying around, at least I would have enjoyed reading them, but no. He was absolutely single-minded.

He said that when the heels of his shoes were worn down, he would change just the heel and wear it again.
He never knew how to live extravagantly. He always used and wore things until they wore out and fell apart.

Your life as a woman must have been very unique.
It was difficult. Some people say I am the happiest woman on earth, but I also went through such hard times.

What did you do when things were difficult?
There’s nothing to do but live. Because I lived in sacrifice it was okay. From the very beginning he would take his Bible and go up the mountains. He didn’t know how to make a living for the household. So what else could I do?

Did you cry a lot?
Needless to say. You cry and and you live.

Have you ever mentioned it? Asking him if he knows how hard you had it.
What’s the use? He would say that I can say that because I have it good. Would laborers listen when someone well-off complains that they have it good? They wouldn’t.

You must have been able to endure because you knew that Rev. Park was selfless and lived only for the will of God.
There were hardships, but I lived thinking there is nothing that couldn’t be endured and nothing that could not be done. He never expected anything from me. He just wanted me to pray and stay at home. He couldn’t stand it when I misspoke or when my name came up either good or bad among the saints. I knew that so that is why I kept myself out of sight.

It was a life of self-denial, suppression and death.
I saw it for myself. I went to Masan Central Church and saw the pastor’s wife interfere too much with the pastor’s work. If the saints had things to discuss, they couldn’t communicate with the pastor because they were blocked by the wife. I remember thinking, “I can’t be like that.” I myself would want to discuss problems with the pastor if something happened. If I wanted that upper hand, my husband could not be in ministry. And there are many female saints around ministers all the time. If the wives cannot stand that, the wife cannot live and the minister fails. I lived a life laying low so that our pastor could succeed in his ministry. And he was successful. He truly loved his saints so much…

He always said how the pastors of our church would not even know what you look like.
Even now I still don’t know the faces of many pastors. I don’t know who some saints are when they greet me, I just smile and nod.

Did Rev. Park ever thank you for your trouble or apologize to you?
He has not. If there is anything I could speak ill of concerning him, that is something I can talk about. He was dignified, truly. [Laughs]

Not even any praise that you did well?
Really, he hasn’t. [Laughs]. I’ve never seen him reward people for doing well. 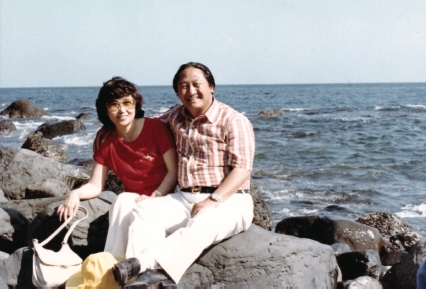 How were you when Rev. Park was very ill in 2014?
Of course I was very worried. I thought he would live to be at least a hundred years old. Saints would fill the church to pray and my heart would ache, looking at the saints and at him…

And on December 17th...
I went to the hospital that day. The elders who were also there invited me to lunch with them. Afterwards they told me that I should go back home since it’s too tiring. I wanted to go back but they even offered me a ride, so I went. The moment I set foot in my house I got the call that he entered heaven. I was stunned and speechless. I was so distressed. That’s my greatest regret. I should have been there for him…

What do you think about transfiguration that Rev. Park would always teach about?
Well, if God allows it, then you’ll be transfigured. But for me, I lay my hands on my heart and ask if I am someone who can be transfigured, and I think not in my lifetime. How can I be transfigured with a heart like this? I can’t be greedy when I don’t do any good. When I think about it I am still a sinner…

But you overcame your inner self, suppressing and enduring your entire life.
Well, I said I endured so that my husband could be successful in ministry, but my heart was still deceitful. It was difficult to suppress that.

Do you still fight? With your inner self?
Not anymore.

How do you know that?
I’m just living while believing that. Just living in faith.

How are you these days, is your heart at peace?
How can one be at peace all the time? I have my children... aren’t my grandchildren my children? I worry for this one and I worry for that one, it isn’t all that peaceful.

Rev. Park said that nations will come dancing. Do you believe it?
I think it is being fulfilled to an extent today. Of course I believe. What can do I do if I don’t? I must believe. I lived till now believing in the Word and I must continue to live believing in it.

Is there something in your life that you regret the most, or something that you would go back to and change if you could?
I don’t think about things like that. I forget what is in the past. If I had a fight yesterday I won’t think about it today. I don’t know how to dwell on things. I’m foolish in that sense.

You said there isn’t much you know, but for us, these are things we have all heard for the first time in history, that only you could tell us. Thank you for lending us your time.
Thank you for listening to my trivial talk. It must have been boring.
Not at all. I truly see it as the work of redemptive history. 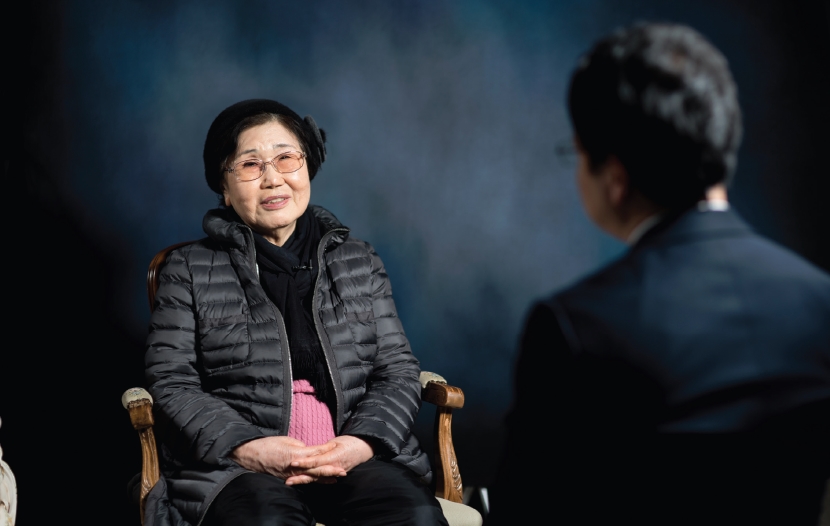