[Seminar] The Resurrection and Reunification of Our Nation 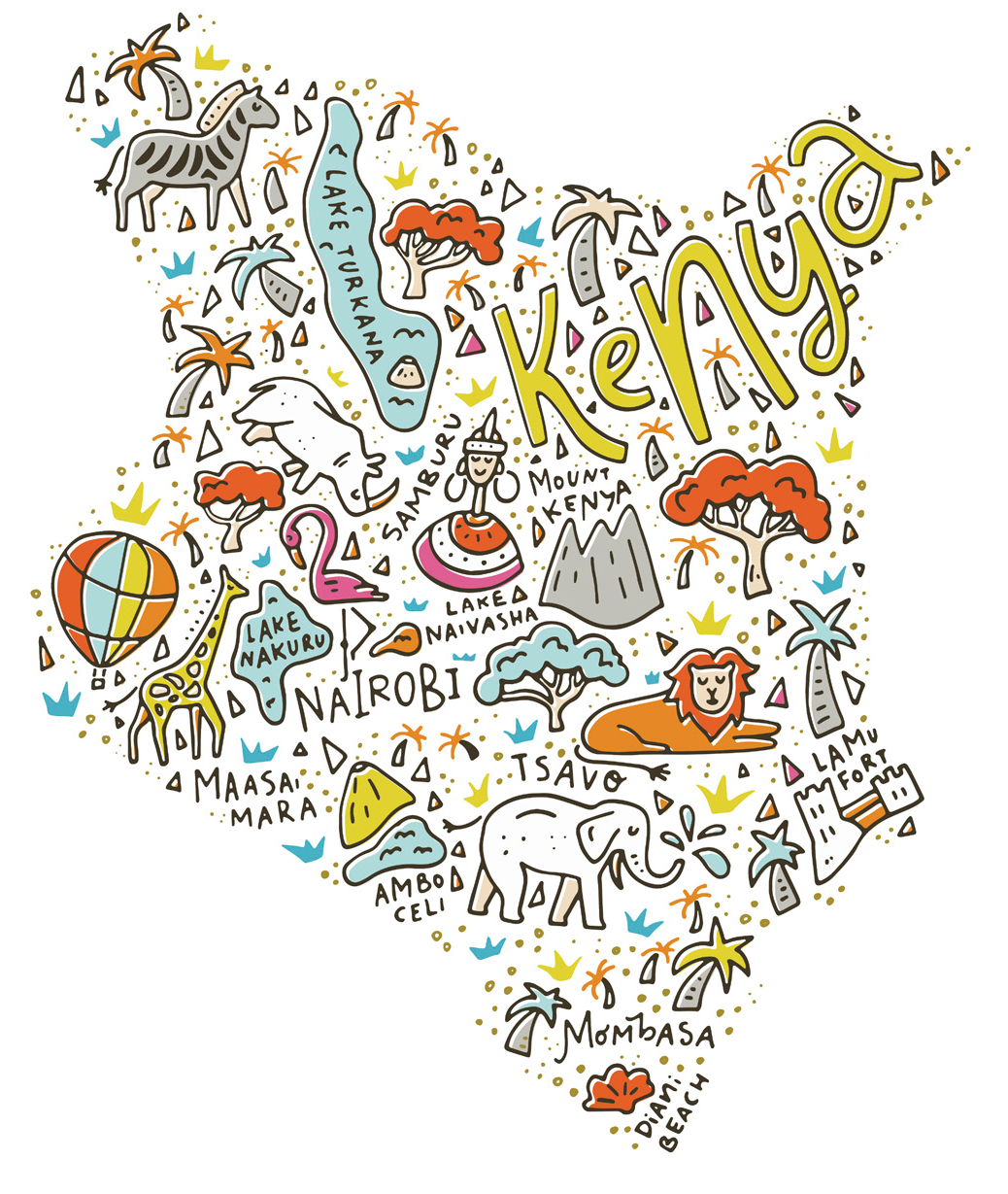 The Resurrection and Reunification of Our Nation

“Your people will volunteer freely in the day of Your power; in holy array, from the womb of the dawn, Your youth are to You as the dew.” (Psalm 110:3)

Situated near the equator, Kenya is an east-African nation that derived its name from “Mount Kenya,” the highest peak in the nation. It was a British colony but gained its independence in December of 1963. Therefore, both English and Swahili are used as official languages. Distinguished from other African nations, the Kenyan population of 45 million people consists of about 40% Christians, 30% Catholics, and 10% Greek Orthodox and other affiliated Christian denominations.

From June 14-16 of 2018, the very first Biblical History of Redemption Seminar was held in the African nation of Kenya. This came about through the efforts of one, Missionary Kim Kyung-sook. Missionary Kim, in order to assist in the economic recovery of the war-torn Republic of Korea, was dispatched as a nurse to Germany on October 25, 1970. It was there in 1980 that she met Elder Lee Jong-chan and Elderess Baek Yeon-sook. This relationship of fellowship in faith, one that continues to today, brought about the first History of Redemption Seminar in Africa.

Missionary Kim began her ministry in Kenya in 1993. She finished her work as a nurse in Germany and was contemplating starting a business. However, she participated in a revival and heard the testimony of Missionary Lim Yeonshin, the first Korean missionary to Africa whose ministry was focused on the college youth. Missionary Kim then prayed for two years in order to understand God’s will for her. Convicted and boldly engaged in African missions, she studied English and cast herself into the language, culture, and people of Africa.

Missionary Kim’s ministry is devoted to the Jesus Camp prayer retreat, situated on a plateau on Mt. Kinangop, which has a peak of 2500m above sea level. Although it is a 4 hour drive from the capital city of Nairobi, many college youth are involved in this ministry to be trained in the faith. Students from Kenya’s prestigious institutions visit every year and volunteer for prayer and revival events called “Open Air,” where they continuously participate in street missions and evangelism. It was also these college students that attended this most recent seminar. While there were some initial concerns on whether these students would be able to comprehend the content of the seminar, they were immediately alleviated as soon as the lectures started. Even more so than the local pastors, the college youth were better trained and better equipped; they exemplified excellent leadership in worship and prayer. More than anything else, they earnestly yearned for the Word of God, absorbing it like a sponge. 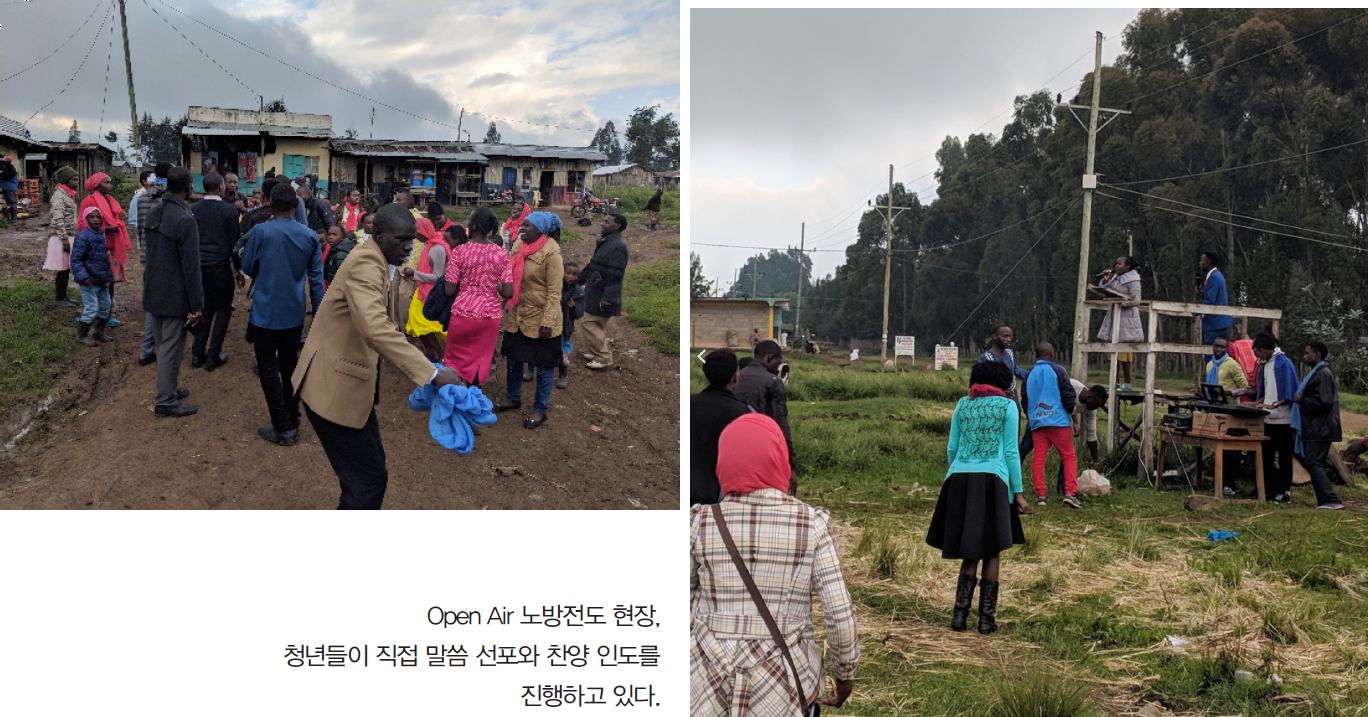 From Korea, it took nearly 24 hours to reach Camp Jesus. As soon as we arrived we began the first two lectures of the seminar. After concluding the evening lecture we retired to our lodging places, and a profound impression was left upon the Kenyan youth. However, the silence of the night was broken at 1:00 am as the youth forwent sleep and cried out in prayer. So, Pastor Philip Lee, also awake in the midst of the prayers, stayed up all night preparing sermons.

The prayers of the youth were continuous throughout the day. After concluding the morning and afternoon lectures, the youth engaged in the “open air” street missions. They visited every neighborhood street and household to evangelize and also to pray with all the people they encountered. Singing praises and ignoring the rain and mud, they did not rest so that even a single soul may be saved. While one team was out evangelizing, another team was supporting them through prayer at the sanctuary. Afterwards, everyone gathered at a local church where a revival was held. The revival was administered entirely by the youth, who led the program in prayer, praise, and testimony of the Word. The Kenyan youth have such a sincere and fervent spirit to save souls by proclaiming the gospel of Christ. Amongst Africa’s many nations, it is no wonder that the word of redemptive history was first proclaimed here in Kenya. 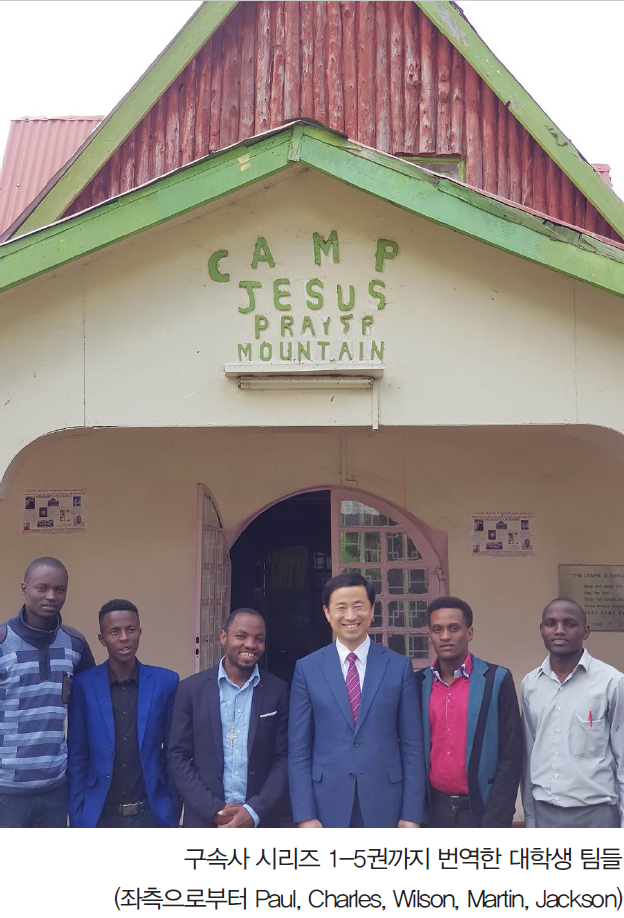 The students, whose biblical knowledge and ministerial competence excelled that of many local pastors, instantly absorbed the Word of redemptive history. Pastor Philip Lee gave two lectures on the tenth book: “The Ten Bestowals and Eight Beatitudes” and “Righteousness Seen Through the Life of Abraham.” After the first lecture, the news of blessing spread and other pastors in town also came to attend the second session in the evening. Everyone was captivated by the Word, and happiness filled the air. On the

following day, we had lectures on “The Genesis Genealogies” and “The Covenant of the Torch.” Because a whiteboard and markers weren’t available, PowerPoint presentations had to be made hurriedly. Despite of lacking sleep due to all night prayer and open-air evangelism all day, the students were so focused throughout the lecture. We were even more impressed with the students when they readily answered all the questions we didn’t expect them to answer. Some students even came after the lecture to teach them more, so we had another session from 11:00 pm that night. 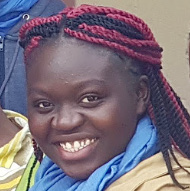 When Kenyans come to know the history of redemption through us, they will be able to learn the truth in the Bible and know God much better than before and grow spiritually ever than before. Thank you for choosing to come to Kenya, I know it was by God’s grace. But you got the desire in your heart to reach out to us in Kenya. May God bless you and continue increasing you so that you can continue evangelize in many nations, as in ours, so we will know God much and much more.

Jackson (4th Year, Moi University, Student Leader and a member of the team that translated HRS books 1-5 in Swahili Language)

I’ve been inspired by this teaching. Though I went through the five books of the series, I gained more knowledge through these teachings. Abraham Park is a great man, like the biblical Abraham, whom God is using to bless other nations. As we are the first Kenyans in Africa to receive this training and teaching, His Spirit will guide us to bring these blessings to the rest according to God’s will.

Of course, we knew that we are part of God’s plan for restoration of the entire world and the entire humanity. But now this brings it much clearer: we are part about the genealogy, so that we can look at ourselves in the genealogy of Christ. In short, we are receiving the blessing of Abraham. Abraham’s blessings also belong to us. We are sons and we can call him Father because by faith it has been passed unto us. I am challenged to learn even more, to be in deeper understanding, deeper relationship with God’s Word, and to know the Bible as a whole. I want to know more how the New Testament is not by itself and Old testament is not by itself, but it is a story as a whole, the history of redemption, which is speaking of one thing, that is, Christ.

This Word of History of Redemption is so profound. We are consuming the knowledge of someone who spent a lot of time in the Word. We are benefitting from someone else’s toil, of which it is a privilege to have the chance to enjoy the benefits.

I have met the desire in Rev. Abraham Park, the task he had for the Word. I believe that having taken that much time to go and study the Word of God in solitude, shows such great desire and thirst for the Word of God. You taught us that God is going to be a friend to those who seek Him and disclose His secret to them. Just as Abraham our Father of faith, Abraham Park was a friend of God, and that’s why God revealed these mysteries to him. If we take such steps, I am sure He will do great things to us also. Thank so much for Abraham Park for showing us the way.

Actually, I’ve never understood the bible the same way as I know now because of

this teaching. I am so blessed because we learned that we have the seed that was promised to Adam and all the way to Jesus Christ, and we are descendants inside the Bible, which means we can find ourselves in the Bible!

When this man of God, Rev. Abraham Park, received the revelation, he was alone. But the revelation is affecting nations. Because what we have received from his ministry will affect not only Kenya, but whole Africa. Everywhere we go now we will preach this revelation because now we are rich. The moment people in Africa get this, they will know that by God’s might we are included in the genealogies in the Bible and will get their identity in the Bible.

“It Takes a Village to Raise a Child.”

At every scene of the History of Redemption seminars, we witness how God has sent many faithful forerunners to pave the rugged ways for us. Missionary Kim is one of them. She desires to spend the rest of her life with the Lord in the foreign land of Kenya.

“God reveals His glory through our weakness. I am ever so thankful. I may not have a friend or family here in Kenya, but the Lord is with me. I am so thankful and happy that God is still allowing this old servant to serve Him. God sees throughout hearts. What shall I want for more before His return? My only wish left is to save more souls—even just one. I’ve already written my last will, also. I lay it open next to my pillow when I go to bed and close it when I wake up. Even if God takes me today, I’ll be happy and thankful.”

The amazing relationship that began in Germany 30 years ago became a channel to spread the Word of Redemptive History to the elite students in Kenya today. Through these young adults, the Word will spread further not only in Kenya but throughout the entire Africa. There is a proverb in Africa that says, “It takes a village to raise a child.” Raising our young people today into spiritual children of Abraham will require much dedication and sacrifice. Inspiration fills my heart as I realize the greatness of our mission to raise the youths of this world into Abraham’s descendants who will do righteousness and justice (Gen 18:19).